Toyota 4Runner 5VZ 3.4L V6 Teardown. How Do You Kill One Of Toyota's Best Ever Engines? 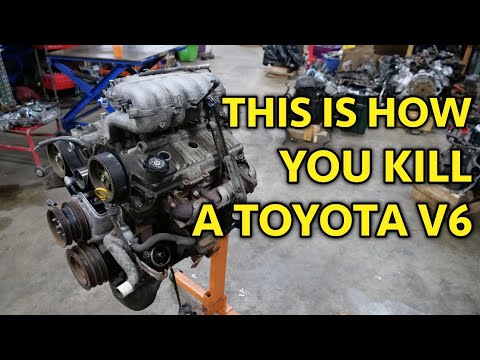 If you’re just finding this channel, I’ll give you a brief summary.
I tear blown up engines apart to figure out what happened, what survived, and hope to have some sellable parts at the end. At this point I’ve done nearly 80 teardowns of various engines ranging from viper engines, diesel engines, to a rotary and many things in between.
Here are a some of my favorites:
Mercedes OM642 Diesel, The MOST disgusting teardown to date: https://youtu.be/_j9vMzgnyfc
Honda J30 V6. One of the worst bottom ends we’ve ever seen on the channel, that’s NOT what I meant.
https://youtu.be/3MV_TIBPNOE
Ford 6.8L 3-Valve V10. Full send with NO survivors.
https://youtu.be/OzV_5m6sCGo
Dodge Viper 8.3L V10. Just a little worse than described
https://youtu.be/H7L9awvNBRU
Toyota Land Cruiser 80 Series 4.5L 1FZFE. Tightest Crank Bolt, Ever.
https://youtu.be/f4WguiCUW0c
I read ALL of the comments. I can’t count high enough to tell you how many times I’ve been asked to teardown a 5VZ-FE Toyota 3.4L V6. I didn’t think it would happen BUT HERE. WE. ARE. The 5VZ-FE ran from 1995-2004 in the 4runner(96-02), T100 Truck(95-98), Tacoma (95-04), and the Tundra(00-04).
There are others in the list of “Yeah, those don’t blow up so I won’t find them”, but I do look. 4.0L Jeep, Ford 300 Straight 6, etc. I have a fondness for the 5VZ and it might be my favorite toyota engine ever. I don’t judge how good engines are based on horsepower, or how well they respond to modifications, or even fuel economy. I consider engines “good” when they are reliable, easy and cheap to service, and most importantly, their tolerance for abuse and neglect. The 5VZ really shines in that manner.
This bad engine was a core that was returned from an engine that I sold, the customers old engine. This is the first blown up 5VZ I’ve had hands on.

As always, I like all of the comments, feedback and even the criticism.

Catch you on the next one!
-Eric

any idea why one of these engines would idle at around 525 RPMs at idle in drive. no check engine lights, and never stalls. its an automatic

1 second in and i already know how to kill a Toyota… start the engine.

You said this engine was a core return? I have a 97 4runner limited with 350k got a head gasket leak of some sort. still runs, but looking for a replacement. Any chance you have any 5vz for sale?

I've said this for years and this seems to support that. Toyotas don't just die…they pretty much have to be killed and it takes a LOT to kill a Toyota. Honda motorcycles (at least) are like that. We just bought a 2016 Highlander with 70,000 something miles. It's almost broken in…great breakdown…

That engine does not look very user friendly. To do a simple belt change it looks like got to tear down a lot of stuff to get to that water pump no thank you!

I have a '97 4Runner and it is still rock soil dependable. The only issue I ever had was a flakey fuel pump around year 20. The rest was all preventative maintenance stuff. Timing belt, lower ball joints, etc. Still runs like new after 25 years. Probably has another 25 years left in her.

Could the bent rod situation been caused by detonation? I know some engines have been known to bend a rod just from that.