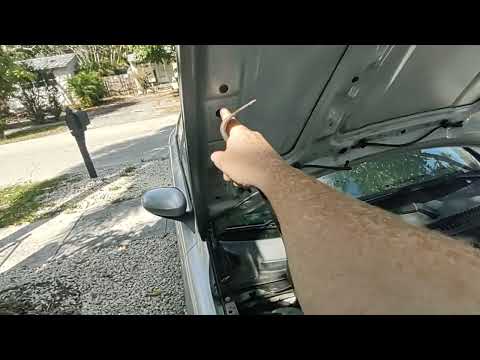 2005 JAGUAR X-TYPE 3.0 AWD.
AMAZON LINK TO STRUTS
https://www.amazon.com/gp/product/B07T65X918/ref=ppx_yo_dt_b_asin_title_o01_s00?ie=UTF8&psc=1
The Jaguar X-Type is a front-engine, all-wheel/front-wheel drive compact executive car manufactured and marketed by Jaguar Cars from 2001 to 2011 under the internal designation X400, for a single generation, in sedan/saloon and wagon/estate body styles. In addition to offering Jaguar’s first station wagon/estate in series production, the X-type would ultimately introduce its first diesel engine, four-cylinder engine and front-wheel drive configuration.The X-Type was developed during the period when Jaguar was owned by Ford as a division of its Premier Automotive Group (PAG) (1999-2011) — and marked Jaguar’s entry into the critical compact executive segment. The programme aimed to double the marque’s worldwide sales — requiring expansion of engineering resources, factory. At launch, Autocar called the X-Type “the most important Jaguar ever.”[2]With annual projections of 100,000 sales, the X-Type recorded a production of 350,000 over its eight year manufacturing run.[3]OverviewThe X-Type, codenamed X400,[4] launched in 2001 to compete in the compact executive class dominated by the rear-wheel drive BMW 3 Series and Mercedes C-class despite Ford/Jaguar having no directly competitive platform.[2]Instead, the X-type used a modified version of the front-drive Ford CD132 platform shared with the contemporary Ford Mondeo — with the addition of all-wheel drive (marketed as Jaguar Traction or Jaguar Traction 4) and handling and steering engineered to minimise front-wheel drive torque-steer.[1] Initially, the X-Type was available only with all wheel drive, using a centre differential and a compact, maintenance-free viscous coupling[1] with a default split of 60 percent torque to the rear wheels, 40 percent to the front wheels. Under loss of traction front or rear, the coupling could vary the front/rear torque split and could fully transfer torque to either front or rear wheels to ensure grip.[2][1] From 2005-on, X-Types used an electronically controlled transfer cases rather than the centre viscous coupling.Despite the X-Type’s importance to Jaguar and Ford’s Premier Automotive Group, and despite extensive engineering, body styling and testing, the X-Type was often described as a “reshelled Ford Mondeo”.[2]As Jaguar’s first compact executive car since the Jaguar Mark 2 of 1959, the X-Type was the last Jaguar styled under the supervision of Geoff Lawson, with Wayne Burgess and Simon Butterworth as principal designers.[5]The four door saloon launched in 2001, and the five door estate followed in January 2004, with production of both ending in July 2009.[6] The estate offered a Cd of 0.32 in standard form and 0.33 in Sport trim.[1]Engines included either of two V6 petrol engines: 2.5 litre or 3.0 litre. In 2002, an entry level 2.1 litre V6 front wheel drive model was added. All three engines were available with either five- speed automatic or five speed manual gearboxes. The X-Type grille was slightly modified for both the 2004 and 2006 model years. The base petrol engine derived from the 2.5-litre that served in the Ford Mondeo, and the 3.0-litre V6 is essentially an adaptation of the base engine from the Jaguar S-Type and Lincoln LS.[1] Eventually, the X-Type would become available with front-wheel drive and 2.0-litre petrol and diesel engines. In July 2009, Jaguar Land Rover announced the end of X-Type production by the end of 2009.[3][7][8]Both saloon and estate configurations were manufactured at the Halewood Assembly Facility near Liverpool,[3] renovated at a cost of $450 million.[1] Technical The X-Type was based on a modified version of the Ford CD132 platform shared with the Ford Mondeo. The X-Type was initially offered as all-wheel drive only and mated to a 2.5 litre and 3.0 litre AJ-V6 petrol engine.
One notable addition to AJ-V6 engine design is the use of variable valve timing. The X-Type’s petrol engine is also set apart by the use of SFI fuel injection, four valves per cylinder and featured fracture split forged powder metal connecting rods, plus a one piece cast camshaft, and has direct acting mechanical bucket (DAMB) tappets. In 2003, the X-Type was also offered in front-wheel drive with the introduction of Jaguar’s first four-cylinder diesel engines (based on the Ford Duratorq ZSD unit from the Mondeo and Transit), and with the smaller 2.1 litre petrol V6. The six speed automatic transmission supplied on the later 2.2 litre diesel models includes Jaguar Sequential Shift. Equipment At the X-Type’s launch, standard equipment included automatic climate control; leather upholstery; eight-way power driver’s seat; 70/30 split folding rear seats; Sapele wood interior trim; tilt-and-telescope steering wheel; six-speaker, 120-watt AM/FM/CD stereo; power locks; one-touch power windows; a power tilt-and-slide glass sunroof; automatic headlights; and 16-inch alloy wheels.