Easiest way to install a Buick rack and pinion nut and bolt!! If anyone else can do it you can too!! 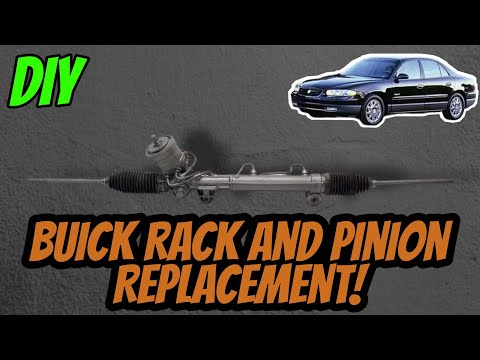 Hey folks so in this video we are going to take a rack and pinion out of a GM vehicle that came equipped with The legendary 3.8 V6 in it this procedure should be the same on Buick Oldsmobile and Pontiac models that have the 3.8 and quite possibly many other front wheel drive general motors vehicles.

This is a how to video on how to remove or this is the video on how to install the rack and pinion, To save time I only wrote one description for the installation video and the removal video please don’t think too bad of me LOL this is a lot a lot of work!!! And even though I know not too many people are going to be working on these automobiles any longer I was doing the work and I felt like my video described it much better than the other videos that I seen on YouTube so hopefully you will think the same thing as well.

Automobile manufacturers actually only make 4 to 7 different model cars but they may have up to 15 different names and styles for them underneath the sheet metal the vehicles are often identical they do this to continuously make profits and making more of one part is much easier than making fewer of several different parts.

FOR THE BIGGEST AND BEST PARTS CATALOG, CHECK OUT DORMAN PRODUCTS AT: https://www.dormanproducts.com/pages/resources/catalogs/dorman.aspx

It’s probably going to be very similar to the rack and pinion removal on a grand am am as well.

We would very much appreciate if you would watch the whole video .(sometimes I’m fun) So you can inform yourself with all the great information that I put in my videos and God bless. I hope the videos helpful for you!

And Thank you for viewing!

Have a great day

“You can’t really break it if it’s already broken!”

Why should you Subscribe to my channel ? I constantly make these videos that show you how to use your tools and show the techniques that we use in our auto repair shop every day. And all it does is help me send you stuff . I do not sell your information I do not solicit you. all it does is add a couple 100 thousands of a cent to me . And it cost you Nothing ! you would only be helping me . And hopefully i was able to help you !! So please be kind and enjoy!!

The Clay Way nor makers,producers and installers will not responsible for ANY damage that happens to your Vehicle or if we are incorrect about any of my information contained in this or any of our videos ,any accidents that happen while you’re performing the procedures that We explain And you perform or anyone else perform. The Clay Way will not be liable in Way shape or Form. By viewing content you are agreeing to these terms.

Anyone know how to buy the transfer tubes separate?

I haven't yet done this but this video has been way more helpful than any of the videos I have watched for replacing the rack and pinion. I've had quite a fit trying to get the old one removed. Thank you so much for posting this video!!