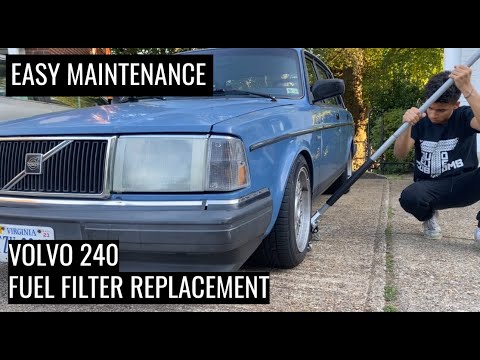 Installing the fuel filter was fairly easy and would’ve been plenty easy with common hand tools if your 240 is at stock ride height as you wouldn’t have to raise the car. The only other note would be to not let the fuel pump tray pull too much tension on the lines and wires. Thanks!

Ryan Little – Talk to Me
https://m.youtube.com/watch?v=rD9PIbXoFms

Max, Yeah…. The music volume fluctuates enough to be distracting. On the other hand, I like that you're addressing the fuel filter, which is a necessary evil of 240DL's but thankfully only about every 100K miles or so. Even though 240DL's have a well deserved reputation for durability, aka "The Swedish Brick" there were some minor flaws.

The fuel filter you replaced is an essential one; plus, the motor mount underneath, where the oil filter is replaced is another one. Volvo's have "sheer-bolts" so in the event of a head on collision, the engine snaps off and goes underneath the car, instead of "crushing" the driver and passenger. Also the fuses. Yep, they though those "floss filaments" were a nifty idea at the time, but they corrode and oxidize over time, so replace them also. Then take a brush and also clean off the fuse holders, which oxidize also.

Most people don't understand that Volvo's are calibrated to work off a vacuum system, so creating short-cuts like losing the fuel filter and relying on a high-pressure fuel system, will only create more problems down the line. Plus, that very same vacuum system needs no holes in any of the hoses, so replace them also, as a matter of habit. Again about every 100K miles or so, but if you notice it, then of coarse replace it. And, no duct tape, or, electricians tape either, as I've watched other people do, which gets old fast and also get's sucked into the overall system, also. However, those pressure fuel systems are notoriously bad for pushing grime and filth into the injector system, but gasoline itself is very filthy from the fuel trucks that deliver said fuel, to the gas stations, whose in ground tanks also are filled with untold debris. My father gave me a little trick, which was to never fill-up your car, when you see the tanker trucks delivering gasoline to the station, because it stirs up the sediment, which floats around for several hours to a full day, after the truck dumps a fresh order into the station's tanks.

Plus, one more extra thing. Some Volvo aficinado's debate this one, but since I own four Volvo's, which have exceeded 300K to over 550K miles, I highly recommend using the various Lucas Oil Products. Why, because they work. They do a great benefit for older cars, especially the older Volvo's and if you can afford it, use a higher grade gasoline. Sure, prices are high, but your Volvo will return the favor with better gas mileage. Lucas Fuel Injector Cleaner or "Tune-up in a Bottle" is a standard practice for myself, because it cost a fortune to have those injectors replaced, but then again dirty gasoline will also become the culprit, also. My GLE needed a new timing belt, so I went to a Volvo dealership to do that heavy duty work. Aside from the mechanics trying to buy my 740GLE, they couldn't believe how clean and perfect the engine was, but this was my father's baby. For whatever reason there may exist ― You remind me of him in personality and also his tremendous amount of patience.

Max, you don't have sponsorship, yet? Older Volvo's are in very high demand right now, especially the classic 240DL's with an excellent reputation for durability and long life. It doesn't matter if you have 100 subscriber's or 1 million ― People want to understand the very things your showing regarding your 240DL. I've heard and read that people have made classic Volvo's very popular again, that people are rescuing old Volvo's out of junkyards and those stuck in dirty barns. Jay Leno's Garage has a P1800, as the poor-man's Aston Martin in design. If you haven't watched it, then please go watch it.

If you good at math, look at your subscription rate and calculate the rate of growth. Sometimes YouTube has these numbers and statistical analysis already there. I don't see many people on YouTube, doing a series only about their own 240DL maintenance or repair. You might as well take advantage of that venue, if it's there for the taking; plus, why not make a little money for your efforts? And get, free parts and supplies also ― Yes, there are "mechanics" that do some repair work here and there, but they are not focused like you have been. If you have any questions, please drop me a line.

See ya, Kid… Until the next video.

Nice video Max! Be careful with the music, sometimes is too loud! BTW my mechanic advised me on just deleting the fuel pump under the car and stay with a high pressure in tank pump like modern cars. I may end up doing so, there are many people doing that. Keep posting videos! Regards, Nacho.

Great video! I was just thinking about searching YouTube for such a tutorial. Your 240 looks awesome with the stance and those wheels! You should consider a cam swap and performance cat back exhaust!