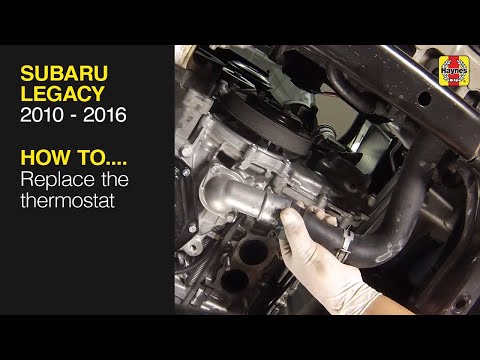 Do you need to Replace the thermostat the Subaru Legacy 2010 to 2016 but don’t know where to start? This video tutorial shows you step-by-step how to do it!

Our Subaru Legacy (2010 – 2016) manual covers petrol and diesel engines, and includes videos for some of the most common jobs, which you can see here in this playlist. Get the full manual https://haynes.com/en-us/subaru/legacy/2010-2016

Exclusions:
Does not include information specific to six-cylinder and diesel engine models

My buddy has a 2011 and its a 2.5. The thermostat housing bolts seem to be in front of block not underneath. Is this a larger engine?

It's not as hard as it sounds, pretty basic tools you'll do it, doing mine now ,came back to see bolt torque specs, also while there is not a bad idea flush coolant and we are replacing lower radiator hose since we are there anyway

This right here is some Total BS! To change a thermostat you HAVE to do all of this. BS! i love how that manifold just come off so easily