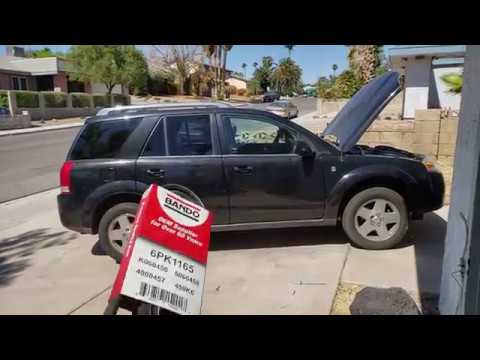 The car in the video is a Saturn Vue 2007. However, the procedures shown in the video will apply to most vehicles and applications.

What is a car’s Serpentine Belt?
Serpentine Belts are used to drive the air-conditioning compressor, power steering pump, water pump and the alternator, and are connected to those components from the crankshaft pulley.

In more modern cars one or two belts – known as the serpentine belt because of the way they twist around multiple pulleys – do all of these jobs.

The auxiliary belt should be checked every once in a while to make sure the tension between pulleys is correct. Pick a point on the belt midway between pulleys and push on it with a finger.

Using a ruler, if the belt flexes by more than an inch it may need to be tightened.

Video File Created Date: Friday, September 13, 2019 (Video may or may not have been captured on this date, it shows the date the video was last converted.)