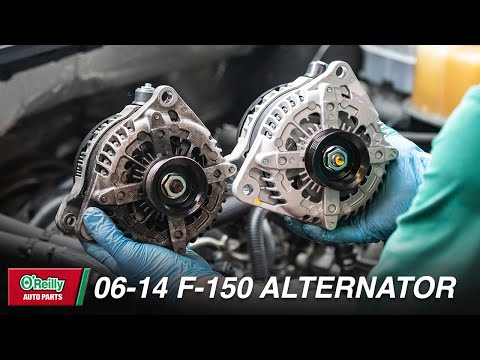 These step-by-step instructions and video detail an alternator replacement on a 2012 Ford F-150, and will be similar to replacement procedures on 2006, 2007, 2008, 2009, 2010, 2011, 2013 and 2014 Ford F-150s equipped with a 5.0-liter engine. The replacement procedures will also be similar for select Ford F-150 FX2, FX4, King Ranch, Lariat, Platinum, STX, XL, and XLT models with a 5.0L engine from 2011, 2012, 2013, and 2014. Replacing a damaged or failing alternator helps you maintain a safe, functioning electrical system, and can keep your truck’s electrical accessories working and your battery charged. If you notice your truck’s headlights or dashboard lights are dim, or if your truck’s battery is not staying fully charged, you should test and replace your alternator as soon as possible to prevent stalling or a breakdown due to a loss of battery reserve charge.

Shop all your automotive needs: https://www.oreillyauto.com/

Your Ford F-150’s alternator charges the battery to help start your truck, and provides power to your truck’s electrical accessories while the engine is running, which includes the power windows, radio, windshield wipers, and more. When the alternator fails, your F-150’s electrical systems and engine will only stay on until the battery’s reserve charge is depleted. Your truck may die, but you might be able to restart it with a jump start or by charging the battery. If you need to replace the alternator for your 2012 Ford F-150 5.0-liter V8 , you may notice dim headlights or that your battery is not staying fully charged. Our step-by-step instructions will help you perform an alternator replacement on your Ford F-150 to keep your truck starting and running as it should.

O’Reilly Auto Parts is a retailer that provides automotive aftermarket parts, tools, supplies, equipment and accessories in the United States and Mexico for both professionals and do-it-yourself customers. We’ve grown from a single store in 1957 to our current size of well over 5,000 locations (and growing), and our channel offers reliable automotive information that is concise and easy to understand.

If you’re not completely comfortable doing this yourself, we’d be happy to recommend a professional technician in your area.
Once you’ve got your supplies together, here’s what you’ll do:

First, open your hood and remove the negative terminal from your battery… and set it aside where it won’t touch metal.
Disconnect the hoses and electrical connector, then Remove air intake tube

Now Disconnect the electrical connector from the back of the alternator. At this point, you should be able to grasp the alternator and remove it from the engine compartment.
Today I’ll be installing an Ultima alternator.

Now you can reinstall the drive belt by looping it over every pulley according to the routing diagram, but you’ll need to leave it off the waterpump pulley for now.

you have to remove upper hose and by pass hose then bleed the system more like a 2 hr job ! Dumb video !

How did he pull it out and put it back in place so easily. It took me 2 hours to take the alternator off. Now im struggling to put it back in.

Thank You Ever so much! You make it look So Easy! I tryed taking my alternator out and using this vid as a reference. The electric cable Clip is still stuck on there, and nobody said the alternator would be Friction Fitted and you'd literally have to pry the bitch out!

Thanks Tony and Keith. I saw the same with the hoses. It also doesn't address that there are 2 different belts – one that uses the tension pulley and one they call a stretch to fit belt for the alternator for my 2011 F150 – 5.0lt, then there is a zip tie involved, it's in the ford manual from what I hear…

This video needs to be redone to show what is really involved. The alternator will not come out unless the coolant is drained and the hoses are removed.

In this video, the did not show the coolant hoses being removed. At the beginning they are there but when after the belts are removed, they are suddenly missing. It is those hoses that are the problem to access the alternator easily since the main hose runs right in front of it.

What is the size of the alternator? How many amp

Chris you are my waifu