How to Install an Intake Manifold – Roadkill Extra 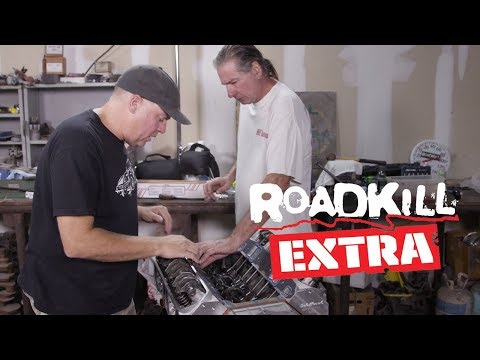 It’s official: the “How to Build Your First Engine Series” is over! This is the final episode, as David Freiburger and Steve Dulcich wrap up their engine project for Roadkill Garage’s Vanishing Paint 1970 Dodge Challenger by installing the intake manifold and giving you plenty of advice as they go. Now it’s back to the regular programming on our daily Roadkill Extra vlog show—but stay tuned for future episodes of Roadkill Garage to see this Mopar V-8 get installed and running!

As you watch, cruise over to Facebook.com/RoadkillShow, follow us, and watch for future posts asking for your questions to be answered on the Q&A sessions that are posted every Friday on Roadkill Extra Powered by Dodge.

These guys got into a big hurry when building the shop. BEFORE you build all the benches and install your tools, for God's sake paint the drywall! It is cheap, fast, increases the light available, and looks better than seeing drywall mud exposed. Just saying…

Freiburger and Dulcich used the cork end gaskets. My mind is blown. Everything I know is wrong.

SOME gaskets come with the little metal plug, reads Big Block lol. and if you want to block heat out of stock type big block , just use the tin snips to carve your own block off out of old BELLY PAN gasket of Big Block Mopar

Those cork end gaskets are leaking on my 340. Gonna go silicone instead cause come to find out edelbrock actually calls for silicone

I was waiting to see what the torque specs were?

Is there a recap lmao?

I seen that, the bolts didn't line up.

Love watching these two, they work well together!

When you rebuild an engine do you replace all fasteners if so would you recommend studs for the mains and elsewhere if possible. I did up a 340 a few years ago and ran into a lot of difficulties with bearings spinning and Carroll Shelby speed secrets stated it was mandatory in all american engine especially Mopar small blocks due to the dimensions of the bearing gernals

Cork or no cork ?
How many of you use black only?

fair dinkum, I would never let these 'tards touch my engine!!!

Cork seals are a leak on any V8 intake. Simply use a bead of silicone. I learnt that from a top engine builder 40+ years ago. And have never used them since.Probably 50 V8s!
And I use silicone sparingly on the water ways too. I am racially predjudice with silastic,, I use black!! I doubt it makes any difference however
And those horrid tin rockers Ok for 3000rpm max family cars. Never performance engine

I just love how this is one complete scene in real time, no video cuts