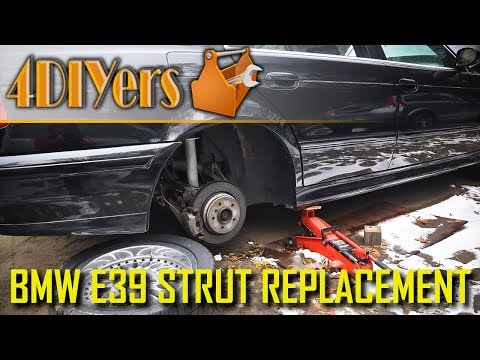 Video tutorial on how to replace the struts on a BMW E39 sedan. For this particular video I am using a 1997 BMW 540i sedan, therefore strut replacement for the touring version will be different. Faulty struts will cause excessive bouncing when driving or going over bumps, wheel vibrations or excessive wheel hop, excessive body roll during corning, knocking or clunking sounds, uneven tire wire, and perhaps you may notice an oily residue around the shock or shock shaft. In this particular scenario, my strut mounting point was actually cracked. When replacing struts, this should be in pairs to equal each side. If one strut is worn, then most likely the other will be in a similar condition, so it’s important to balance the handling of the vehicle. So both the passenger’s and driver’s side rear struts will be replacement on this car.

Procedure:
-remove the rear head rests
-remove the pillar light & remove c pillar trim
-remove the speaker covers
-remove the child restrain caps
-remove the seat starting with the bottom first
-remove seat back
-the seat back then needs to be pulled upward to unclip the 4 mounting tabs on the backside
-tuck the seat belts behind the seat so it’s easier to remove and lift out
-remove the seat belts, they use a 17mm bolt, there will be three in total for each of the seat belts
-remove the plastic clips along the front side where the seat back used to sit
-pop the seat belt trim out, so the seat belt latches can be feed through the holes
-remove the 4 phillips screws on the center headrest bracket
-the rear window shelf can be fully removed
-remove the speakers, they will have 2 phillips screws
-disconnect the electrical connector and lift the speaker out
-the 3 child restraint brackets have a T40 torx bolt
-the seat belt reels will also need to be removed they use a 16mm nut
-jack up the rear of the vehicle
-remove the wheel
-jack up the control arm to remove the weight off the sway bar, then remove the sway bar link
-lower the control arm
-the base of the strut is held in with a 21mm bolt
-pull the insulation back on the rear window shelf and remove the 3 13mm nuts on the top of the strut
-remove the fender liner, there will be various fasteners and clips around the liner that need to be removed
-the fuel tan filler neck will also need to be unbolts and swung out of the way, it uses 2 10mm nuts
-remove the gear clamp on the filler neck and disconnect the hose
-install a bottle jack between the control arm and subframe to hold the wheel carrier assembly into place
-remove the strut, allow it to fall down and then tip the top out
-use a spring compressor to break the strut down
-once the coil spring is under compression, remove the center 16mm nut on the strut assembly
-remove the spring compressor so you can remove all the components from the old strut and install them on the new strut
-replace any worn or damaged parts as needed
-reinstall the spring compressor, then install the top components along with the nut and tighten to 20ft lbs or 27nm
-slowly release the spring compressor and ensure all components are in the correct position and orientation
-ensure the mounting point on the wheel carrier is clean, then install the strut assembly back onto the vehicle
-I used a medium grade threadlocker on all the remaining fasteners
-torque specs for the strut to wheel carrier is 94ft lbs or 127nm
-for the driver’s side, the only difference is the expansion tank for the fuel tank that needs to be swung out of place
-reinstall parts in reverse of removal

Thank you to all those who watch my videos and support my content. Don’t forget to subscribe to my channel for future tutorial videos and like my video if you found it helpful. New videos are always being uploaded every week!

© 4DIYers 2013
All Rights Reserved
No part of this video or any of its contents may be reproduced, copied, modified or adapted, without the prior written consent of the author.

Do You Think I can replace the self leveling suspension for struts instead? it's seems that it has the same housing, space, height, and fixation points as the struts.

Wow I shouldn`t watch this. Now I know what is waiting for me on the weekend x)

Imagine what a dealer would charge for this.

Ummm I did this on the on the passenger and drivers side at a fraction of the time. You don’t have to remove the wheel well liners. All you need is to do is remove the top control arm completely cut a piece of wood 9 1/2 to 9 3/4. Place the wood on the right wedge it in between the swaybar it will fit almost perfect. Disconnect remove the very top bolt the level sensor then the 16 mm bolt to the right lower control arm. Now move the traction sensor lines and the entire assembly will fall out freely and unencumbered to the left. You’re gonna save about 40 minutes

Wow this is the best tutorial ever and a great help ! My e39 M% just had the rear struts replaced not long ago and already I'm hearing some serious knocking/clanking from the rear passenger side strut area. Hoping it's not broken somehow.

God what a nightmare. The shop that's currently doing mine quoted me $500 labor for all 4 corners and I just got the call that it was going to take, ummm, a little longer than they estimated. They really should have watched this first. Great vid btw.