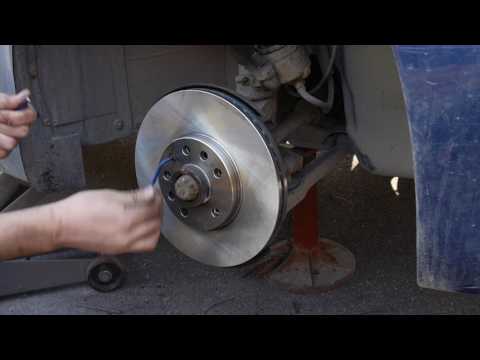 In this video I’ll show you how to replace the front brake rotor and brake pads on your SAAB 9-3 (m.y. 1999 to 2002). Mine is a 2001 9-3 Aero but I’m pretty sure the procedure should be the same, or at least very similar, on other versions of the car except perhaps the Viggen due to it’s larger rotors, but I could be wrong(?).

I got the idea for making this video as I needed to replace the ones on my own car after it failed the yearly check-up due to worn out rotors and brake pads. After searching the web I found a few other tutorials and a handful of descent videos on YouTube describing the process. However, none were for this particular model, but for it’s successor; the 2003 to 2007 year version, and apparently it’s NOT exactly the same. Luckily I found out before I went out to buy new tools, as I didn’t need them. Apart from the that, the actual work should be the same.

Please note; I’m very aware of the horrible condition of my otherwise wonderful car. It’s very dirty after having been parked outside throughout the winter months. A few more things need to be fixed on it as well, such as the headlight wipers and some rust here and there, so there’s no need to comment unless you feel you need to get it out of your system. 😉

I really tried to keep the video as short as possible to not waste anybody’s time, but it proved to be a rather hard task in it’s own right. The goal was to have it under 10 minutes, but since that didn’t work out too well you can always skip ahead to the bits you’re interested in…

Thanks and good luck!

good job well done id buy your allen wrenches somplace else though the spring clip hods up the brake pad into the caliper thank you english was not a problem understanding have you ever been to the koensieg factory the ghost town symbol ? its an old airforce base

your english is perfect
completely understandable

Thanks for this video. It was exactly what I was looking for. Now … back to change a breake pads.

Anti-seize shouldnt be used for the guide pins (13:03) as petrolium products can degrade the rubber sleaves. Silicone grease is alot better! 🙂

great video! thanks for the help. I'm also selfishly happy its in English 🙂

This must be the longest brake job I have ever seen

My hub and front rotors are completely different. I have a 1999 9-3 SE north american

I love the metal playing in the backround. Everyone else play happy go lucky, "Yeah, let's learn today music." Instasubscribe

"Bear in mind, my English is a little bit rusty, but as long as you can understand what I'm saying, we should be good."
Seriously? You know what you did.
There are English teachers in the US and UK who speak worse English.

My rear brake drum wouldn't come off. I bolted the wheel back on and that gave me a lot more leverage, the drum came off straight away.

What size rotor did you use?

Great video. I just bought a used 9-3 for $800, and it doesn't need a lot of work. I'm putting new brakes all around, changing some hoses, and putting in new upholstery, and that's about it. Really nice car, especially for the price.

I would like to mention that it is a good idea to put LocTite on the caliper bolts. A few months ago, my family and I had some trouble while traveling through Arizona due to a caliper bolt coming off. The caliper fell forward into the rim and jammed it while we were moving. Suddenly, the wheel locked up, causing a potentially dangerous situation. Fortunately, I was able to get to the side of the road and build a temporary solution, but it stranded us in Phoenix for a few days. It also ended up costing quite a bit of money, as I had to get a hotel room and a rental car while I searched for a part that was difficult to find. I ended up finding a van like mine in a wrecking yard and found the bolt I needed, but I had to buy the whole caliper for $40. I put LocTite on that bolt for sure.

Do one for the rear fixed caliper!

Where did you get your pads and discs from? I was thinking of getting mine from Biltema…

Thankss man, it saved me hundreds od US$

What an excellent production. Your information and level of detail is perfect. Long live the SAABs still on the road!

Your english is a bit rusty? And then proceeds to speak better english than most americans ^^ But great video by the way 🙂

Do not remove the caliper hangers. The discs (rotors) come out easily, just angle the old disc and lift by a few millimetres and they come off

dont use copper on the pins..use silicon paste next time