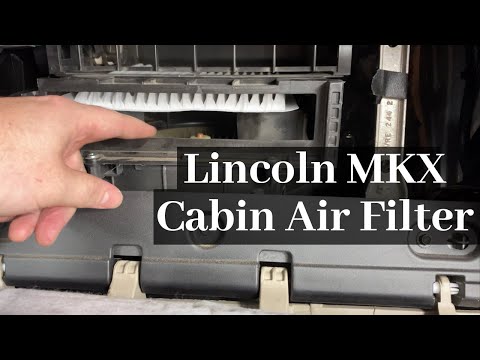 Cabin air filters help enhance the air quality inside your vehicle, creating a healthier, more comfortable environment for you and your passengers. A properly functioning cabin air filter can stop up to 90% of dust, pollen, and spore particles from entering your Lincoln MKX passenger compartment.

WHEN SHOULD YOU CHANGE CABIN AIR FILTER ON YOUR MKX?
It is recommended that you remove and replace this cabin filter every 15,000-20,000 miles.

Thanks, this video helped me a lot

+I SAY YOU FOLKS ARE GREAT! I HAVE A PRISTINE 2012 LINCOLN MKX AWD. HAVE BOTH A SERVICE AND SHOP MANUALTO COVER STUFF. I AM NOT A MECHANIC, JUST LIKE TO SEE WHERE EVERYTHING IS AND HOW IT IS MAINTAINED. YOUR SITE IS TOPS! THE LINCOLN MANUAL HAS NO MENTION ON DOING A CABIN FILTER CHANGE. I JUST FOUND YOU AND SUBSCRIBED. THIS IS SO COOL TO SEE HOW TO CHANGE MY CABIN FILTER. THANKS FOR MAKING ME EMPOWERED TO DO IT.
GOD SPEED AND KEEP THIS CHANNEL HEALTHY.